When trading in silver or gold, it is important that the precious metal is of a good quality. In the Viking period, silver could be debased with copper or lead. Alternatively, base-metal objects might be plated in silver or superficially surface enriched to give a deceptive silvery appearance. In order to expose these fakes and debasements, the Vikings developed a number of techniques to reveal the purity of silver.

One such technique was 'nicking', in which small knife cuts or notches were made to the edge of an artefact, such as an ingot or arm-ring. Today, these are visible as crescent-shaped marks. On coins, the more usual technique is known as 'pecking': sharp jabs were made to a flat surface with the tip of a knife, resulting in a small curl of metal. Pecking seems to have appeared in England in the ninth century, as a response to the mixed quality of coinage encountered by the Vikings.

In both cases, the technique was designed to expose plated or enriched forgeries and/ or to test the purity of the silver. If the resistance felt to the nicks and pecks was too soft, there was a chance that lead had been added; too hard, and too much copper might be present. This was also the rationale behind one further testing technique: hammering out a silver item into a thin strip. Since it would take quite a lot of experience and skill to be able to judge accurately the 'right' feel of a peck or nick, these techniques were probably carried out by specialists.

Some items from Viking hoards have huge numbers of nicks or pecks, such as this cut silver ingot. Why would a single artefact have acquired so many nicks? Was it suspicious? And why would somebody test an artefact which had evidently been tested multiple times previously? It's a bit like pressing the button for a lift that has been pressed multiple times before. A study of one of the largest Viking silver hoards has shown that there is no link between the quality of silver in an object, and the number of testing marks it acquired. Perhaps nicking an object was part of a ritual or routine that sealed the end of a transaction: a form of handshake or signature.


A heavily nicked ingot from the National Historical Museum, Stockholm (photo: me, hand: mine )
Posted by Jane Kershaw at 03:47 4 comments:

Viking metalwork from the south-west

The Vikings are not normally associated with the south-west of England (e.g. Dorset, Wiltshire, Somerset). Although Viking armies raided the region in the 870s, there is no recorded Viking settlement and archaeological evidence for a Viking presence is slim.

There are, however, a few items of metalwork which suggest Scandinavian cultural influence in the region, and possibly even the presence of Vikings. One such item is this strap-end from Mudford, Somerset, recorded by the Portable Antiquities Scheme: PAS 'Find-ID' SOM-9ABAE0, and now on display in Somerset Museum. 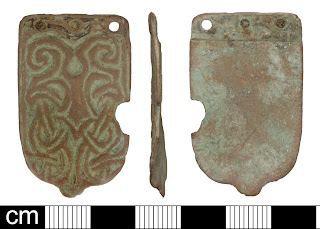 This strap-end could have been worn by men or women. It would have been fitted to the end of a waist belt, to keep the ends from fraying and to help guide it through a buckle.

It's design consists of symmetrical interlace with scrolled terminals and looping, contoured strands. These are positioned on either side of a concave-sided sub-rectangular rib. No animal elements are present, but the origin of the design was an animal as seen from above; the rib representing its torso and the scrolled terminals its spiral hip.

This decoration reveals that the strap-end is Scandinavian and dates to the late ninth or tenth century.  Similar strap-ends are known from Denmark, and the same design also appears on tongue-shaped brooches from Sweden. Either the Mudford trap-end was made in Scandinavia and imported to England, or it was produced in England in imitation of a Scandinavian fashion. Either way, it provides rare evidence for the presence of Scandinavian dress styles in an area of England normally thought immune from Viking influence.

My research is part-funded by the tax-payer. Read about it here!

The Bullion Economy of Viking England: (not very)FAQ's


What is the Viking bullion economy?

In the Viking bullion economy, weighed silver and, less commonly, gold was used as a means of exchange, rather than coin. Within a bullion, or metal-weight, economy, what is important is not the form the metal takes, but its weight and purity. The Vikings stored silver in ingots and ornaments, and cut them up into small pieces in order to generate payment. They weighed silver using hand-held balances and weights, and tested the purity of silver through ‘nicks’ and ‘pecks’, the aim being to expose plated forgeries and base-metal debasements.

The Vikings operated a bullion economy in Scandinavia and in areas they colonised, including England.  In England, however, the Anglo-Saxons had long been using coin, in ways familiar to us today. Where we find evidence for bullion in England, we therefore have evidence for a distinctly Scandinavian economic and cultural practice. This can be studied to answer core questions about the Vikings in England, such as: What was the area of the UK corresponding to Viking cultural influence? What were the sources of Viking wealth? What did the Vikings buy with silver and to what extent did these two economic systems, the coin and bullion economies, interact? This, in turn, can generate new insights into broader questions of social integration in Anglo-Scandinavian England.

Past study of Viking bullion has been dominated by the evidence of silver hoards, found in England in large numbers from the early tenth century. While these approaches are valuable, material selected and deliberately deposited in hoards may not be typical of items used in daily exchange. My project uses an altogether different category of evidence: finds from settlements and single finds, discovered over the last two decades as a result of metal-detecting. As accidental losses, these ought to represent the scale and use of bullion more accurately.

This material encompasses hundreds of bullion-related items, of ninth- and early tenth-century date. I am studying four main categories of evidence: ingots, that is, silver and gold bars; ornaments, especially arm- and neck-rings; foreign coin, such as Arabic dirhams, and regulated weights. Most of this material comprises recent metal-detector finds, but some items come from archaeological excavation, and a few are antiquarian finds (discovered before 1900). My database currently includes c.450 objects in total. When it is complete, I will put it on-line.

Rings as bullion, I thought they were ornaments?

Neck-, arm- and finger-rings were both ornaments and a means of storing bullion. The ability to literally wear your wealth is one of the most distinctive characteristics of the Viking bullion economy. When complete, these ornaments could be worn as symbols of prestige and authority – most likely on special, public occasions, rather than in day-to-day life. But when necessary they could also be taken off and cut up to generate payment. This seems odd to us – a bit like hacking bits off an expensive watch in order to pay for the weekly shop - but the concept appears to have been deep-rooted in Scandinavian society. Sometimes rings were made to a specific weight, and thus their value could be standardised.

Posted by Jane Kershaw at 03:06 No comments: