The accurate weighing of hack-silver and gold was critical for the operation of the Viking bullion economy.  In order to check the value of bullion being exchanged, Viking traders weighed the bullion with hand-held balances and small lead or copper-alloy weights.  In England, one type of weight associated with Viking activity is a lead weight with inset metalwork. These weights are not included in hoards, but they are among recent metal-detector finds, with some being found at market places and urban sites in presumed commercial contexts.

The inset metalwork is usually just a small fragment, which has been taken from a larger object.  Sometimes this can be recognised as culturally Scandinavian –the fragment might derive from a Scandinavian oval brooch, for instance. But it is much more common for the metalwork to have an Insular background (that is, it was made in the British Isles or Ireland). Often the metalwork contains enamel, or decorative interlace schemes, both of which were popular Insular art forms.

Usually the metalwork was cut rather haphazardly, although in some cases a complete object was used (e.g. a complete strap-slide, as in the picture below). It may seem odd that bullion weights could incorporate metal fragments of varying size and weight whilst maintaining a weight standard, but in most cases the metal fragments will have contributed only slightly to the overall mass of the weight. Moreover, since the lead was usually shaped to fit the mount, it is clear that weights were fashioned with specific metalwork pieces in mind.

A lead weight incorporating an Insular belt-slide, found in Cumbria and recorded by the Portable Antiquities Scheme (PAS 'Find-ID' LANCUM-683C84)

The reason why metalwork was re-used in lead weights in this way is unclear.  It seems unlikely that it was for aesthetic purposes – some of the weights are not exactly attractive. Another possibility is that the metalwork served to personalise weights, allowing the owner to easily recognise their set in a trading environment where multiple sets of weights were in use. This would mean that the owner of the weights could trust his or her own set, and thereby guard against fraud in a transaction. The discovery of multiple weights in graves, for instance, in the Scandinavian boat-burial from Kiloran Bay, Colonsay, supports the idea of individual ownership of weight sets.

But why re-use Insular metalwork in particular? It seems clear that this type of weight first emerged in England, soon after the cessation of Viking raids on Ireland and the west coast of Scotland. These raids generated wealth for the Vikings, often in the form of bullion. It may be that Insular metalwork held symbolic value, serving as a visual reminder of the source of Scandinavian wealth in precisely the contexts when bullion was being exchanged.
Posted by Jane Kershaw at 08:48 No comments:

During the Viking Age, gold was considerably scarcer than silver. It was therefore much more valuable, probably around 10-12 times silver’s value. Viking gold and silver objects were rarely deposited in hoards together, suggesting that silver and gold fulfilled different functions. Moreover, whereas silver objects were often fragmented to generate small sums of bullion, gold objects are normally found in a complete state. This has led to the view that gold objects such as arm- and neck-rings were worn as high-status jewellery items, or perhaps ritually deposited, while silver was more often a means of payment.

However, evidence from settlement finds is providing a fresh perspective on the economic use of gold.  At the Viking winter camp of Torksey, Lincolnshire, several hack-gold fragments have been found, some with signs of cut marks, indicating they they had been cut from larger objects. A fake gold ingot (a copper-alloy ingot with a gilded exterior) is also known from the site. The presence of such a fake hints at the local use of gold in trade, as well as the presence of dodgy traders.

Of course, gold was still highly valuable. Even small amounts were carefully preserved. Another recent settlement find is a tiny gold ingot, found on the Viking-period farmstead in Old Lejre, Denmark. Given the size of the ingot, it's easy to see how it could have been dropped, and lost for good. Interestingly, the ingot still shows faint signs of hammer marks, which were sometimes applied to ingots in preparation for cutting into even smaller pieces. This shows that even very small quantities of gold  carried a significant value. 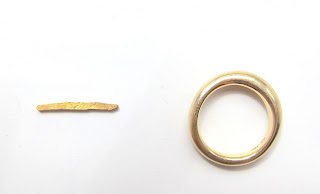 Tiny gold ingot from Old Lejre, Denmark, scaled against one of my rings.

This emerging picture of gold use within the Viking bullion economy prompts a reassessment of the gold contained in hoards.  Recent research by the leading Viking scholar James Graham-Campbell has shown that the (complete) rings contained within the gold hoard from Hoen, Norway, were weight-adjusted to the same unit of 100g. This would not be necessary if the rings were intended only to be worn, but would make sense if the rings were to be traded or stored as countable wealth. Complete gold rings may, then, have had more of a role within the bullion economy than has previously been realised. (For more on the Hoen hoard, see here)
Posted by Jane Kershaw at 04:23 7 comments: